Extraperitoneal caesarean section techniques are still relatively unknown, yet they offer great benefits to both mums and their babies.

Monitoring of pregnancy and childbirth

Be advise, some parts of the film may shock a sensitive audience.

A caesarean section, (coming from the Latin “Caesar” meaning child born by incision) is when a child is delivered by making an incision in the mother’s lower abdomen. It is carried out when natural birth is either impossible or poses a risk to the mother and/or the unborn child. Or the mother opts to give birth in this way.

Since the late 90s, caesarean sections have benefited from many advancements in anesthetic and surgical techniques. This has meant that the mother’s experience is much safer and greatly improved.

“Delivery via the abdomen known as a caesarean section represents around a quarter of births in France today. However, it is still not very well accepted by our society which tends to demonize this procedure. I believe we should reconsider the way we think about it. Women who give birth by caesarean section should be reassured and not made to feel guilty. I would like society to stop judging these women who make the choice to give birth in this way!

Whether they choose to give birth naturally at home, to deliver in a maternity ward with an epidural or have a scheduled caesarean section, every woman should be able to find a doctor, midwife and medical team who can support and guide them through their chosen birthing plan as long as there are no medical risks. Every year, millions of women worldwide give birth to their child via the abdomen. Some are forced to do this and others elect to have this procedure. The type of childbirth a woman has may depend on their background, culture, education and medical condition. It is also closely related to her medical team’s care and advice.

It is important to keep in mind that a caesarean section represents a way of giving birth for the mother, a birth of a baby and an operation for doctors. My team and I strive to offer care and support to meet the physical and pyschological needs of the mother, the father and the baby by putting various measures in place:

Anaesthesia for a scheduled caesarean section

Anaesthesia, called spinal anaesthesia, consists of a small puncture made in the lower back of the patient. It starts taking effect within just a few minutes and makes the entire area of the body from the tummy button to the toes unresponsive to pain. The patient, however, continues to feel touch on her stomach with no related pain which can sometimes seem quite a strange sensation. Thanks to the new anesthetic products available today, it is possible to get up and walk 3 hours after a caesarean section.

Developed in the 90’s, this is the most common caesarean technique in the world. It involves a generally simple surgical procedure. There is limited trauma to tissue and the recovery time is relatively fast. A urinary catheter and an infusion are usually left in place for 24 hours. The patient can be up and about the very next day.

The mother’s active participation during the caesarean section: The Guillarme blowing method

Developed by Luc Guillarme, a physiotherapist, the Guillarme blower is a small plastic mouthpiece which the patient blows into to build up a resistance and in so doing, uses her diaphragm and her abdominal muscles. This was initially developed for abdomino-perineal physiotherapy. However, It is also very useful in caesarean section to allow the patient to exert an effective push. At the same time she is fully involved in the birth of her baby. A study that started towards the end of 2017, at the Santa Maria Maternity Clinic in Nice, has already shown a very high satisfaction rate from the first patients to use the Guillarme Blowing method. This has been specifically linked to patients simply using the Guillarme blower and actively taking part in pushing their baby out. From a medical perspective, it reduces the abdominal action normally used in caesarean section, (vigorous support by the midwife’s hand on the patient’s upper abdomen to push the baby out) and makes it easier to eject the baby.

The importance of early skin-on-skin contact with caesarean section 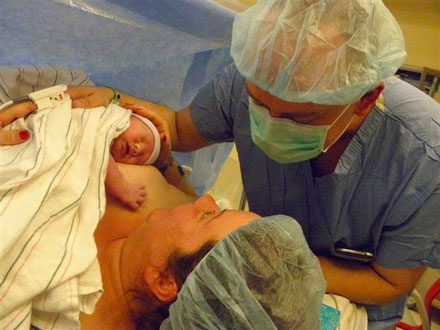 Studies show that a newborn’s breathing will more readily find a steady rythm when they have had early skin-on-skin contact with their mother in comparison to being separated.

Just after birth, most babies are alert, can see well and according to studies, have a visual preference. They want to see a face, “their mother’s more than anyone else!”. In addition, skin-on-skin contact increases the natural production of oxytocin secreted by the mother. This hormone can encourage the bond between mother and child.

The newborn needs heat immediately after birth. It has been shown that their temperature is as well maintained by skin-on-skin contact as if they were placed in an incubator.

Extraperitoneal caesarean section is a new, less aggressive technique for women. The sequelae and the risks of complications are less than with the so-called classical method.